Margules Groome and Forest Research Group has prepared this Viewpoint report based on information available to it at the time of its preparation and has no duty to update this material. Nothing in this Viewpoint is or shall be relied upon as a promise or representation of future events or results.

Margules Groome and Forest Research Group expressly disclaims any and all liability arising out of or relating to the use of this Viewpoint report.

Summary of Key Observations in Part 1

In Part 1 of this ViewPoint report we observed:

In late March the yield curve inverted briefly when the 10-year US Treasury yield dropped below the 3-month yield for the first time since 2007. As at the end of April 2019, there is only a ~50 basis points difference between 3 month and 30-year term yields.  During the month of May a key slice of the Treasury’s yield curve became the most inverted since 2007 (Figure 1) as 10-year yields dropped to 2.128%, a new multi-month low, the lowest since September 2017.

History suggests that an inversion of the yield curve points to a likely recession within the next 12-18 months. 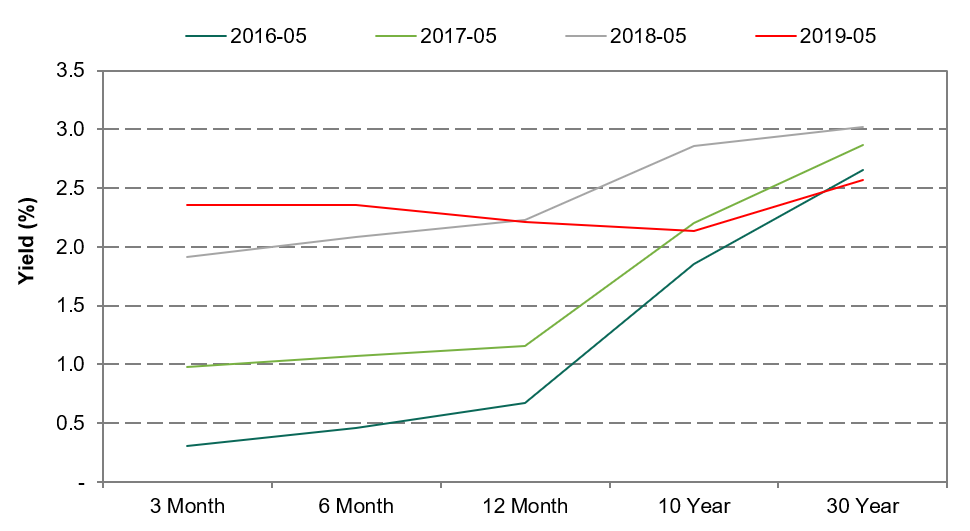 Morgan Stanley in late May indicated that an “adjusted” yield curve that accounts for quantitative easing and tightening has been persistently inverted for the past six months (Figure 2).

Trade tensions between the US and China further escalated and an early resolution now appears to be less likely. Negotiations in the future are likely to be affected by the next US presidential election in Nov 2020. China escalated the trade war by counter-imposing tariffs on US imports which includes 20-25% rates on US log exports and multiple wood products.

New threats of a trade war between the US and Mexico is starting to emerge sparked by illegal immigration from Mexico across the southern US border.

Developments in the UK has become more unpredictable following parliament’s rejection of Theresa May’s 4th Brexit deal and her subsequent announcement to step down as prime minister.

Deutsche Bank AG’s share price continued to dive to new lows (reached EUR92.05 in 2007, EUR6.09 on May 31st) and Bloomberg, in a May 28th report, states that the Bank’s options are limited for a turnaround. The Bank presents a systemic risk to the global economy; this bank is about three times the size of Lehman before its collapse, but divided opinion exists as to whether a collapse of Deutsche Bank has the potential to spark a global financial crisis.

Australia’s economy reportedly entered a per-capita based recession based on Sept and Dec 2018 GDP results. Per-capita GDP strips out the effect of population growth to expose underlying weakness in productivity.

In late May, the RBA governor flagged a likely 25 basis point rate cut in June 2019 from 1.5% to 1.25% in attempting to bring unemployment and inflation in line with the bank’s targets. There is an expectation for a further rate cut before the end of the year, down to 1%.

Figure 3:
Spread between US and AU 10-year bond yields 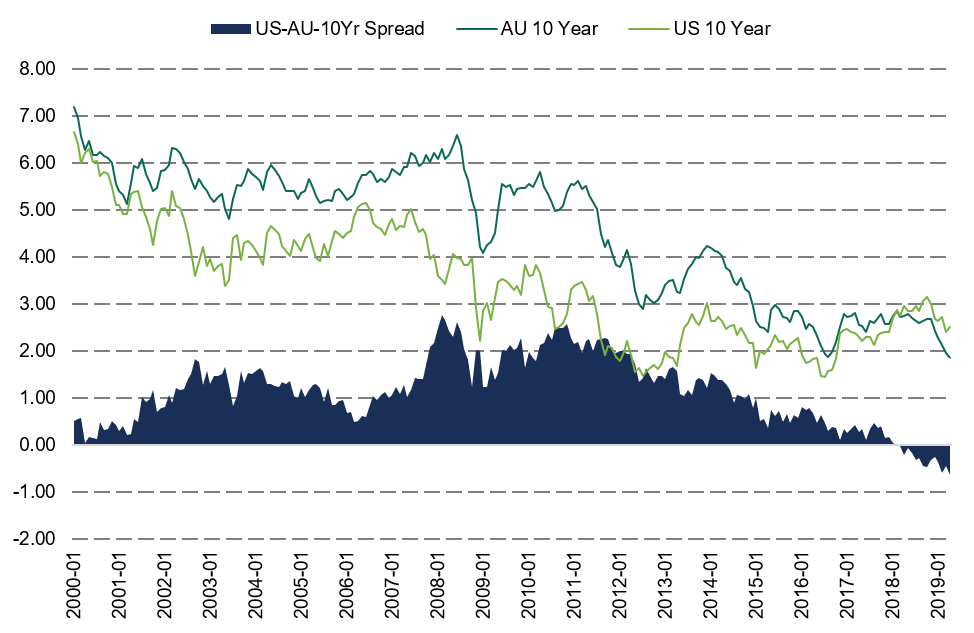 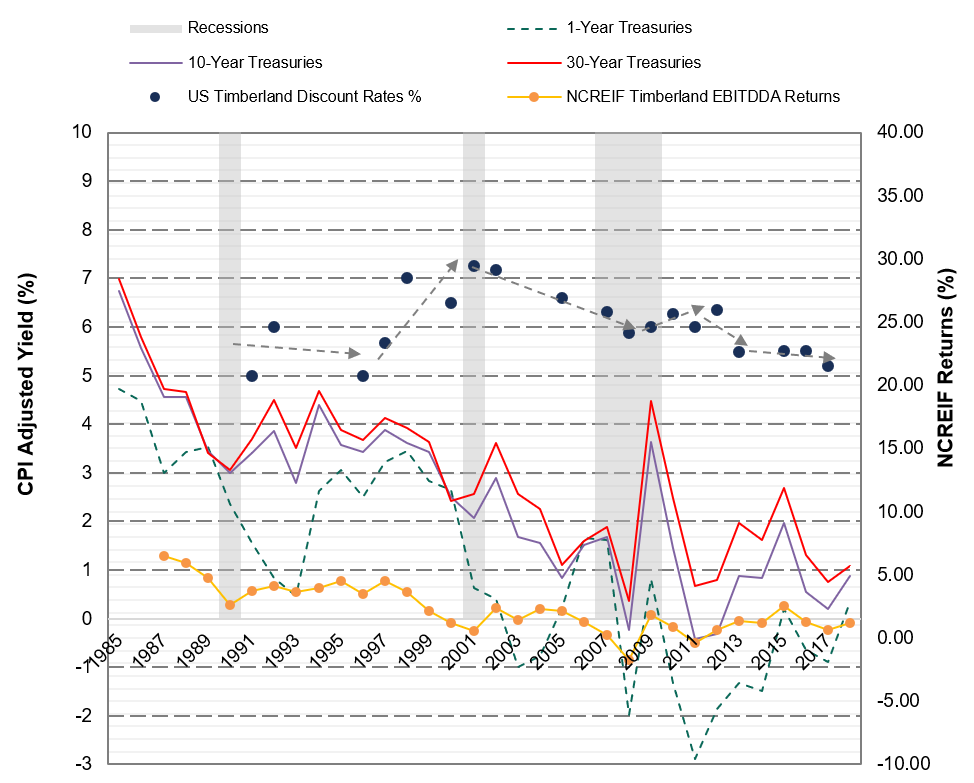 A closer examination of Figure 4 shows that since ~2001, a declining trend in timberland discount rates can be observed, consistent with the longer-term Treasury yield trend. It can be expected that timberland discount rates will increase in a higher market risk environment. This can be clearly observed during the 2001 recession although the evidence for a discount movement during the 2007-2009 recession suggest a lesser and delayed response. Explanations for the latter may include:

A survey of discount rates by Dr Bruce Manley as applied by appraisers in Australasia (Figure 5), suggests a general directional trend similar to that of US timberland, albeit rate changes are less pronounced. 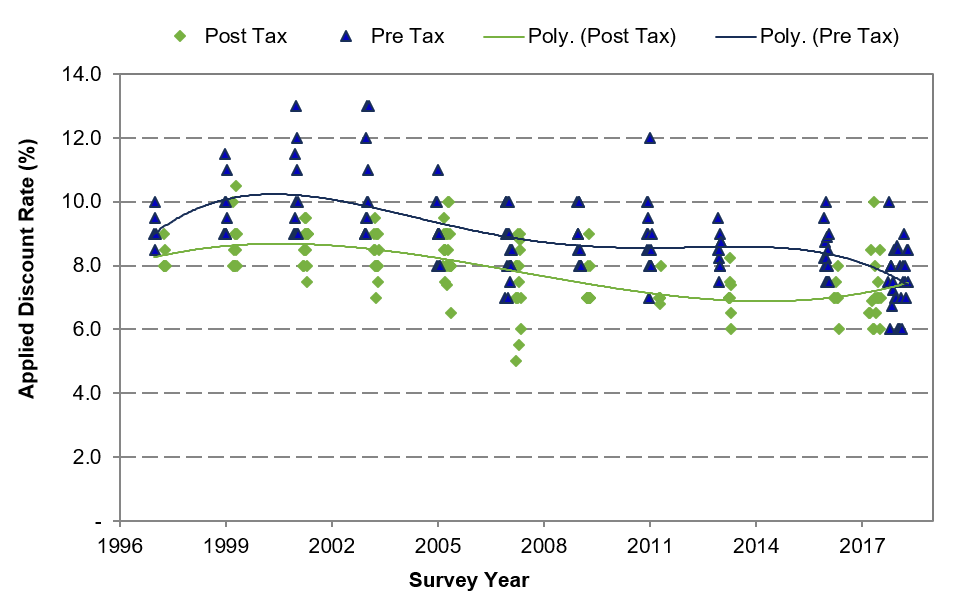 If the global economic outlook were to continue to deteriorate and if we were to enter a recession, what will be the implications for timberland investors? This question is of particular relevance at this time given record-low interest rates and the distinct possibility of a negative interest rate environment on a go-forward basis.

Some insights can be gained from the European bond market. In March 2019 the yield on benchmark German government bonds fell below zero. In this environment investors have been paying to place their money in a safe asset, like the 10-year German bond. This bid up bond prices and pushed yields down. With negative yields, investors in these bonds are guaranteed to make a loss.

In the context of timberland investment, the severity, duration and perceived risks will likely affect investor behaviours:

In terms of market impact in the Asia Pacific, it is likely that a recession may affect log prices and hence timberland investment unevenly. For example, the domestic market for Australian softwood logs largely depends on the local housing construction cycle whereas export Australian eucalypt chips ultimately depends on demand for hardwood pulp production, largely used for packaging, tissue and writing papers. In the case of New Zealand, the construction cycle in China will dictate the movement in softwood log exports.

Margules Groome is presently seeing some increase in timberland transaction activity in the Southern hemisphere and the US which may suggest that some investors are taking profit while others may be positioning themselves based on their forward market expectations.

Forestry Industry Shifts in Response to the Unfolding Brexit Saga