Strong demand in the US and China, and constrained supply from key exporters, are driving global shortages for softwood lumber.

Anyone who recently bought sawn lumber will know that prices are high this year. This is felt globally, but nowhere more than in North America where average prices for 2021 are more than twice their long-run average levels (Figure 1), although US prices have come back down in June and July. Prices are also high in New Zealand, due to elevated sawlog export prices, and strong demand for lumber for everything from fruit pallets to house framing. While this is welcomed by forest owners and sawmills, it is driving costs in construction and packaging, leaving many producers and buyers globally to wonder when lumber prices will return to normal. 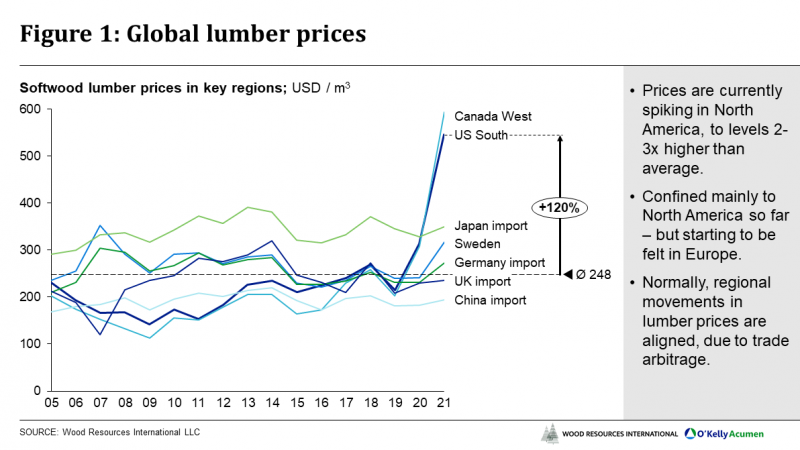 A recent study by Wood Resources International and O’Kelly Acumen suggests that while the current lumber price spike will pass, as already seen with a downward adjustment in the US, higher-than-normal prices are here to stay. The price spike in 2020-21 was largely due to COVID causing labour shortages and boosting DIY demand. Looking forward, the most important drivers of market tightness are strong demand growth in the US and China, and reduced exports from Canada due to harvest restrictions. Resolving the global lumber shortage will depend largely on Europe’s ability to further expand exports. New Zealand also has an important role to play in Asia-Pacific markets, and an opportunity to shift export volumes from sawlogs to lumber through increased domestic processing – although in the past it has proven challenging to compete with China’s own sawmills.

The US is the largest lumber market in the world, with almost one quarter of demand in 2020. It is also highly dependent on imports, mainly from Canada. Of the approximately 86 million m3 of lumber consumed in the US in 2020, 26 million m3 was imported and 86% of that was from Canada. US imports have been much higher in the past, reaching 40 million m3 in 2005 during the height of the housing boom. Demand fell sharply in 2006-2009 but has been rebuilding steadily since then.

The strong growth in 2020, despite (or because of) the COVID pandemic, took many by surprise. Initially there were concerns about a market contraction with sawmill capacity curtailments and construction projects put on hold to reduce the spread of the virus. But it soon became apparent that 2020 would be a strong year for lumber demand in the US – preliminary estimates suggest 5% growth in 2020, compared to less than 3% p.a. in the preceding 5-year period 2014-19.

Most of the demand growth in the US lumber market in 2020 was driven by “Repair and Remodeling” (Figure 2), home renovations both by professionals and homeowners. With workers on furlough, social distancing and travel restrictions, homeowners spent much more time at home – and many apparently felt the need and time available for home improvements. Stimulus cheques received in the mail and reduced expenditure on travel and eating out probably also contributed to the sharp rise in R&R lumber demand. DIY stores such as Home Depot reported up to 30% higher sales in 2020. 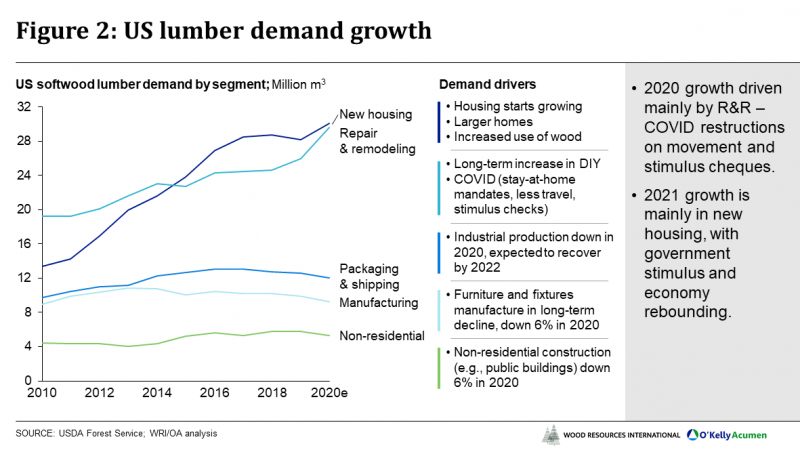 The outlook for US lumber demand in 2021 is also strong. But this year, greater growth is expected in new house construction. Most single-family homes in the US are made with a timber frame, requiring on average 30 m3 per unit. But lumber is also used in some multi-family homes, a trend which is expected to increase with the use of cross-laminated timber (CLT), a new product that still represents a very small share of lumber demand but is growing rapidly. Housing starts are expected to grow by anywhere between 5% and 15% in 2021 – forecasts vary but most point to much faster growth than usual, due to government stimulus and a broad economic recovery.

The challenge for US lumber wholesalers now is where to source the lumber. In the past, imports from Canada have been flexed to meet demand, because domestic supply takes time to adjust to rapid demand growth. But Canadian lumber exports have fallen in recent years and are expected to fall further, due to harvest restrictions in BC following the Mountain Pine Beetle epidemic. While there is potential to increase lumber capacity in the US South, it will take years to build new sawmills. In the meantime, the US is increasingly reliant on European lumber imports to fill the gap (Figure 3). 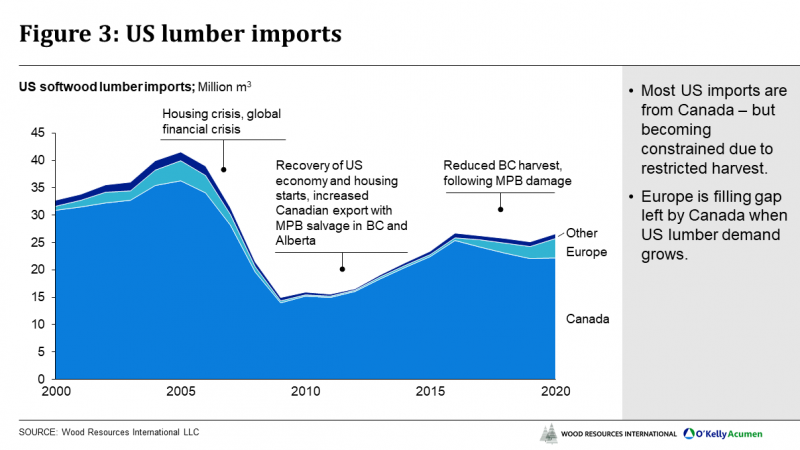 Meanwhile, Asian markets are also growing strongly – in China in particular, which is home to 70% of demand in the region and 19% of global demand. Chinese demand for softwood lumber grew at 11% between 2010 and 2020. Lumber has a broad use in the Chinese economy, including in construction (concrete forming, scaffolding), furniture, outdoor structures (fences, walls), packaging, and decorative applications (frames and panels, doors, and windows). All these segments are experiencing strong growth driven by rising incomes, urbanization, investment in infrastructure, manufacture, and export of heavy packaged goods. The Chinese economy is expected to recover rapidly from COVID-19 with the IMF forecasting GDP growth of around 9% per year in 2021 to 2025, following much slower growth in 2019 and 2020.

More than one third of lumber consumed in China is imported, mainly from Russia but also Europe and Canada. Imports from Europe were higher than usual in recent years due to a bark beetle infestation in Central Europe leading to salvage operations. These bark-beetle related exports will decline in coming years and much of the other exports would be redirected to the US if demand and prices there are strong. Chinese imports of softwood lumber from Russia are therefore likely to increase in coming years, also because of the expected Russian ban on the export of softwood logs. 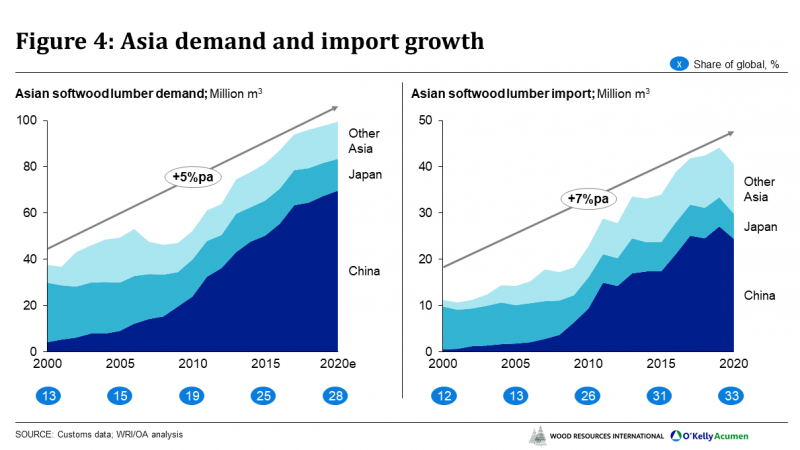 Europe is an important region for softwood lumber production and export. It represented one third of global production in 2020, and almost half of global export. Europe’s role as an exporter has steadily increased since 2000 as production growth outstripped demand growth in the region. For many of the leading producers, more than half of production is to export – often to China, Japan, the Middle East and North Africa.

European lumber exports to the US are usually quite low, except when prices are high on that market – such as during the US housing boom in 2004-06, and again with the price rally in 2019-2020. This US export business has been largely opportunistic but will become a more permanent and established trade. 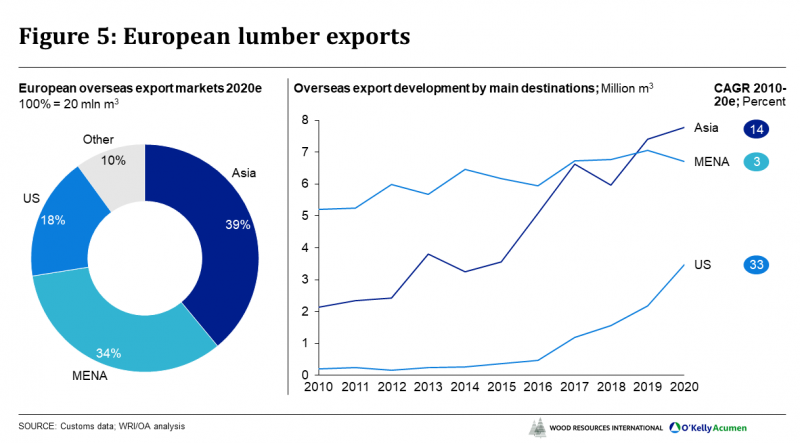 Global lumber markets will become increasingly reliant on European lumber over the next decade – representing an opportunity for European lumber producers to expand production and export. The US and China – two countries with a significant dependence on lumber imports – are expected to see strong demand growth. Few other export regions, apart from Russia, are likely to increase exports due to either constrained log supply or strong domestic lumber demand. Post-COVID demand on Europe’s domestic markets is also likely to be strong.

The future growth of Europe’s lumber exports will depend on several factors. Sawmill capacity will need to increase, with brownfield and greenfield expansion. Increasing sawlog supply is also critical and challenging for countries recently impacted by bark beetle – only a few countries in Europe have the potential to significantly increase harvests of softwood sawlogs. Economic considerations will also determine how attractive it is for European lumber producers to export, especially lumber prices, and Europe’s cost position in those markets. To ensure adequate lumber supply, prices on many markets globally will need to remain high. 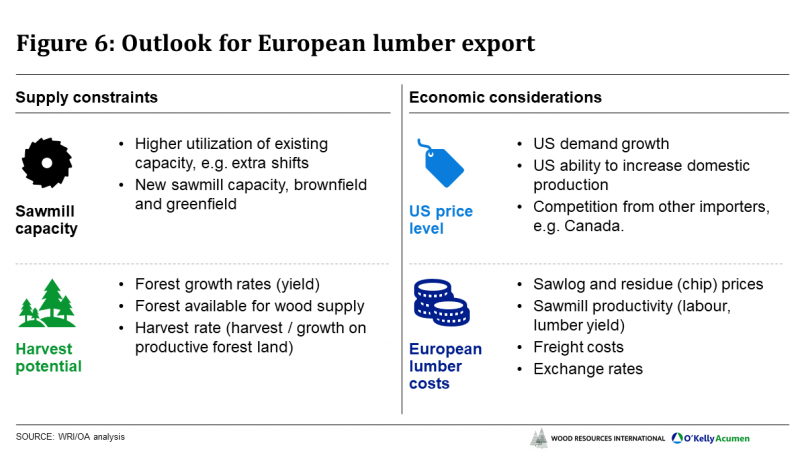 Strong lumber demand in the US and China, coupled with constraints on exports from Canada, will mean a tight demand-supply balance in the coming decade. Trade flows will evolve with increasing export from Europe to the US, and from Russia to China. US prices will remain relatively high, after a downwards adjustment from the price spike in 2020 – and this will impact global prices. There will be opportunities for sawmill operators in many regions – especially Europe and Russia, but also New Zealand – to expand production and export. Where this leads to tighter log markets, this will impact fiber industries, such as pulp and panels, and have implications for forest owners and timberland investors. Rising sawlog prices can be expected in New Zealand, either for export or domestic processing. Higher log prices will potentially lead to being increased interest in investments in softwood plantations in regions such as New Zealand and Australia.

For more information about the study from Wood Resources International and O’Kelly Acumen, visit the WRI website: https://woodprices.com/focus-report-series/