It is also used for the manufacturing of other engineered or reconstituted wood products as well as exported across the globe as logs, sawn timber, engineered wood and wood panels.

European manufacturers have demonstrated that innovation can result in advanced chemical-free, thermally modified timbers with cutting-edge mechanical and physical properties. Made from  imported NZ clear Radiata pine and marketed under the Accoya and Kebony brands, these modified timbers target high value market segments. Their designed-for-purpose properties offer a growing range of applications and technical solutions for both outdoor and interior applications. They are increasingly drawing the attention of architects, designers, specifiers and consumers. 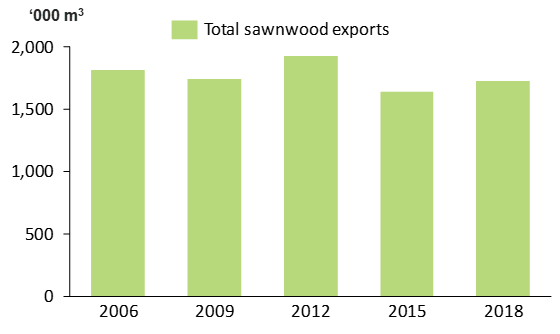 Australia and New Zealand import Kebony and Accoya timbers although the market size is small. This contrasts with the strong market growth and new production capacities announced in Europe and North America. Accsys Technologies’ production capacity in Arnhem, Netherlands, is reported to have reached approximately 60 000 m3/a, a 50% production capacity increase from five years ago. A new Kebony manufacturing site has been launched in October 2018 in Flanders, Belgium, enabling the Kebony company to double its capacity to 20 000 m3/a of Kebony Clear wood. Based on a modular design, Flanders’ new facility has the potential to quadruple its capacity with limited additional investment.

Logically one wonders why modified timbers are not produced in AU/NZ given Europe and North America’s successful market and capacity growth?

Over the last decade (2008-2018), NZ global sawn timber exports remained relatively flat at approximately 1.7 million m3. However, timber exports to Europe grew from less than 10 000 m3 in 2006 to over 65 000 m3 in 2018 with a value of almost 60 million NZ$. The main European destinations for NZ timber continue to be Spain and the Netherlands, with a market share of 52% and 31%, respectively (Fig. 1 & 2). This reflects in part these countries increased production of modified timbers. 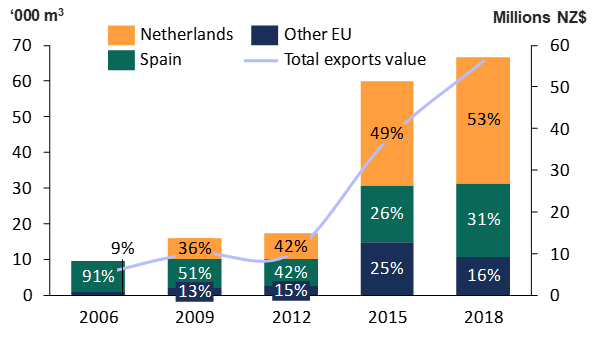 Market development, available raw material and anecdotal evidence from local market players suggest a medium to high probability of an eventual AU/NZ-based manufacturing of Kebony and/or Accoya to service local and regional markets.

Considering CLT, the first movers in the local markets were the end-users of the product, i.e. building companies. Local industry then played catch-up and began manufacturing the product.

The trend continues with Quintessential Equity announcing (in December 2018) that they will start to manufacture prefabricated CLT components at Cross Laminated Offsite Solutions’ (CLOS) facility in Geelong, Victoria.

Will Kebony and/or Accoya wood products follow a similar pathway or will the sawmillers recognise the opportunity this time and license the technology, invest and innovate?

How Up-to-Date Is Your Understanding of Timberland Valuation and Reporting Standards?