Proposed changes to the ETS continue to dominate the market in New Zealand.  Discussion documents circulated by environment minister James Shaw just prior to Christmas 2019 that proposed, among other changes, a NZD20 to NZD50 price band, as well as increasing the governments fixed price option (FPO) from NZD25 to NZD35 in 2020 has a drastic affect on NZU spot prices in the New Year.  Consultation on these discussion documents closed at the end of February.

Prices for NZUs were at or just under the NZD25 price cap for the majority of the Q3 and Q4 2019, increasing drastically after the release of the discussion documents, reaching an all time high of NZD29.20 in late January, before retreating through February.  The spot price is currently sitting at NZD25.70 as market participants await the outcome of the consultation and feedback on the discussion documents.

In terms of volume, 2019 recorded the highest issued volume of Australian Carbon Credit Units (ACCU) since the program’s inception, with a total of 14.8 million units issued.  This is expected to increase in 2020 to in excess of 16 million units.  Currently there is a balance of accounts of 6 million ACCUs in the Australian National Registry of Emissions Units (ANREU). This balance, coupled with the increased supply forecasts suggest that the total available supply will significantly exceed demand over 2020, potentially placing downward pressure on contract prices.

Contracted prices for the ninth Emissions Reduction Fund (ERF) auction in July 2019 averaged AUD14.17 per abatement tonne, with current spot prices for ACCUs trading at a 15 – 20% premium above contracted rates as voluntary off setters look for ACCUs with strong co-benefits.

The 2019-20 bushfires have had limited effect on Emissions Reduction Fund (ERF) projects.  The vast majority of ERF land-based projects for the Eastern States are located inland in South West Queensland and North West NSW, while the burnt areas were predominantly along the coast.  Latest estimate is that less than a dozen projects have been affected, with an issued supply of 120 000 ACCUs, much of which is likely to regenerate.

The Morrison Government released a discussion document in February 2020 around reducing the regulatory burden for forestry and farm forestry projects under the ERF, in particular around watershed requirements.  The crux of these proposed changes is allowing the development of projects in areas where water availability issues are being addressed through other mechanisms.  The second proposed change is to allow projects that cease or avoid harvesting of plantation forests to be eligible for the ERF, essentially allowing for the generation of carbon credits through not harvesting plantation forests.

The future development of the Voluntary carbon markets is unclear.  There are positive signs that demand for emissions reductions units will increase, notably the development of the Carbon Offsetting and Reduction Scheme for International Aviation (CORSIA) agreement between major airlines to limit airline emissions to the level of 2020, which will come into place next year.  For airlines not able to access domestic emissions trading schemes, voluntary carbon markets will be the key tool used to meet this agreement.  Along with this, increased media coverage around the potential for forest plantings as a tool to mitigate climate change has increased the profile of the VCU market.

The major oil producers and refiners have begun to embrace carbon offsetting as both a means to offset their own operations as well as selling their customers the opportunity to offset their fuel and oil use. However, rather than purchasing these credits on the open market, they have favoured investing into the offsetting projects themselves to ensure a consistent supply and price of credits.  Most notable was Shells announcement in 2019 of the establishment of a USD300 million forestry programme, focused on developing forests in the Netherlands and Spain.  As much of the demand for carbon credits from the major oil companies will be meet through their own investments in carbon offsetting projects, their effect on the VCU secondary market will be limited, in fact, the scale of these projects may mean an additional surplus of VCUs able to be traded, further depressing the market price.

Longer term, it is hard to see the basis for a sustained increase in prices for VCUs, as countries increasingly look to set up compliance schemes to meet Paris commitments, as well as an increasing reluctance to allow international transfer of emissions reductions units.

The market showed a significant dip in traded volume over 2016 and 2017, followed by a strong recovery in 2018.  However, prices have not reacted in kind, showing a steady decrease in real terms over the same time period. 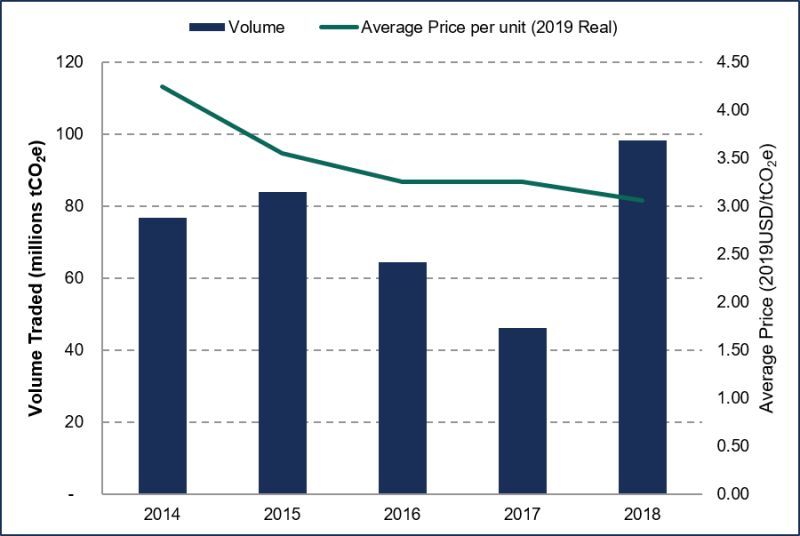