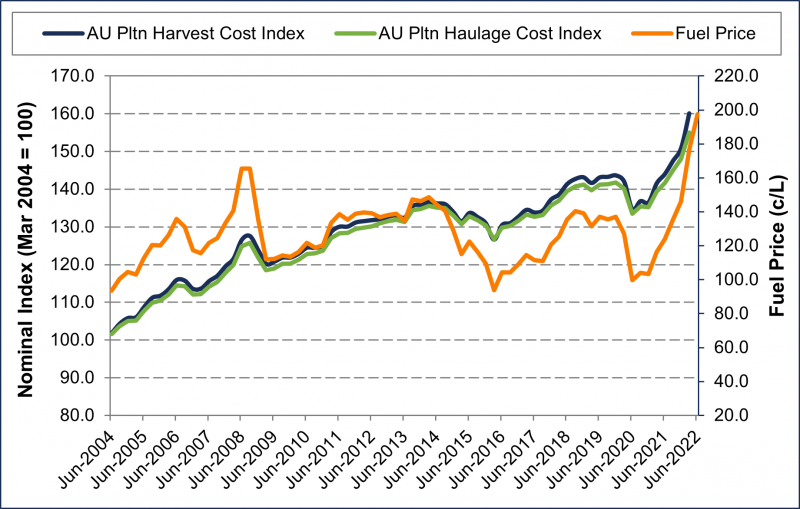 Margules Groome’s quarterly harvest and haulage cost index for Australian plantation operations is based on price indexation mechanisms used by industry, weighted by volume harvested (Figure 1). The previous index published in March for December 2021 showed a continued recovery in fuel prices as economic growth returned post-COVID-19 pandemic. The advent of the Russia-Ukraine war, subsequent trade sanctions on Russia, and the ensuing impact of global energy prices have seen fuel prices go higher as predicted. The average diesel terminal gate prices (TGP) were being reported as ~2.10/L in June 2022. They have never been this high in nominal terms. Unfortunately, fuel prices will likely go higher still as the war drags on, Russian trade sanctions continue, and the Federal Government re-imposes the full fuel excise from late September.

These increases in fuel are also feeding through to prices generally as shown by CPI increases (+5%/a in March and expected to go to +6-7%/a by year’s end). Cost of living pressures is expected to force wages higher as well. With the economy generally recovering strongly post-pandemic but still beset by capacity constraints, high inflation is likely to be a significant factor until the end of 2022.

The harvest and haulage cost index reflects the continuing rapid fuel price rises, CPI, and wage increases. Up 5% in the March quarter 2022, with another ~5% quarterly rise expected in June. These indexes are now well into record high territory in nominal terms. In real terms, however, the cost spike in 2008 remains higher but is likely to be eclipsed this year (Figure 2). Costs may moderate slightly in the December quarter because of the increasing fuel excise on cost review calculations, but the effect will likely be only temporary. 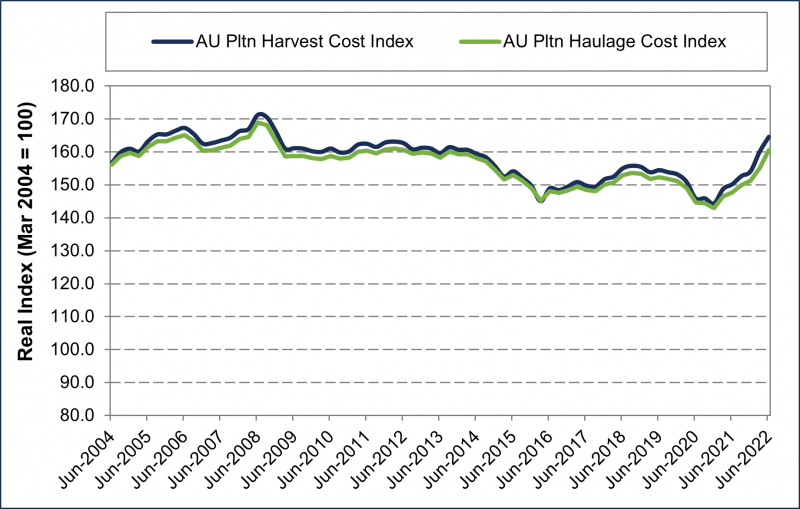